Showing posts from April, 2011
Show All

A decorated pineapple fromage Light and frothy cold puddings made with egg and thickened with gelatine are known as "frómas" in Icelandic and as "fromage" in Danish. Those who know their French will realise that this is the French word for "cheese". How it underwent the change in meaning from French to Danish is not known. This recipe is in all likelihood originally Danish. This is a popular dessert in my family that my mother makes  for special occasions. With a bit of adjustment, it can be adapted to other kinds of flavours. For example, I adore the lemon version. Ingredients: 250 g sugar 5 eggs, whites and yolks separated 12 sheets of gelatine 2 cups double cream or whipping cream 2 small cans (8. oz.) pineapple rings in juice, cut into small chunks (retain 2-3 rings for decoration) Pineapple juice from the can juice from 1 lemon Method: In separate bowls, whip together the egg yolks and sugar until light and fluffy, whip the cream
8 comments
Read more

April 13, 2011
My friends call this cake "that heavenly date cake with the caramel sauce". It is apparently an old recipe, but someone must have rediscovered it recently, because it has been served a lot at birthday parties and ladies' handicrafts clubs lately. I haven't got a clue where the recipe originally came from, but in Iceland it's known either as döðluterta með karamellusósu , which simply describes what it is, or as Dillonskaka or Dillon's Cake , which could suggests Irish or British origins. However, it might, and this is supported by information from some older ladies I know, be named after Lord Dillon, a British aristocrat who came to Iceland in 1834, fell in love with a local woman and built a house that he gave her before he left the country. It was a famous scandal at the time, as they had a child out of wedlock and were prevented from marrying by his family. She ran a guest house in the house he gave her and sold meals there for many years. Today the ho
6 comments
Read more

April 06, 2011
Now its time for the "long Danish" I mentioned in the previous post. You will need the dough, prepared as in the previous post, but rolled out into strips, about 15 cm wide and slightly shorter than the cookie sheet you will bake them on. The thickness of the dough should be about 5 mm. You will also need: Almond paste (recipe in the first post) and thick jam, e.g. strawberry or raspberry OR egg custard Pearl sugar Flaked almonds Icing Spread the jam down the centre of the strip of dough and spread or pipe the almond paste on top. Fold the sides into the centre so they overlap slightly and press together. Gently transfer to a greased cookie sheet. Brush with beaten egg, milk or water, sprinkle the pearl sugar and flaked almonds on too, and bake. This is called an old-fashioned Danish in Iceland. If you prefer custard to jam, you spread the custard down the centre of the dough strip instead of jam and leave out the almond paste. Brush with beaten egg, milk or water a
Post a Comment
Read more 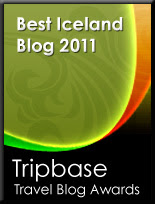