Showing posts from May, 2011
Show All

May 30, 2011
Angelica ( Angelica archangelica ) is the most highly regarded medicinal plant growing in Iceland, considered more potent than even yarrow ( Achillea millefolium ) and Iceland moss ( Cetraria islandica ). It has been used to fight infections (bacterial, fungal and viral), as a local anaesthetic, to strengthen the immune system and as an aid to digestion and recent research has show it to be effective against cancer cells. Abroad it is used to flavour alcoholic drinks such as Bénédictine , Chartreuse, Vermouth and Dubonnet, and locally the root is used to flavour schnapps (Hvannarótarbrennivín). As a medicine it is most often made into a tisane or a tincture, using leaves, root or seeds. It is also a food plant. Here is one recipe: Take fresh, young angelica stalks, peel off the outer layer and wash the stalks in cold water. Cut away any spots. Pour hot water over the stalks, then cook them in salted water until they are soft. Drain carefully, and serve with whipped butter. May als
4 comments
Read more 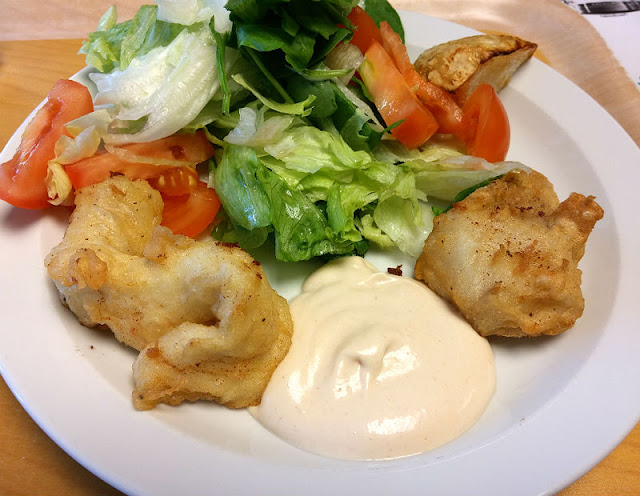 I have had several requests for this dish, so I decided to post the recipe. Apparently it was a favourite with American servicemen stationed at Keflavik airport and some of them still remember it fondly. I'd be the first to admit that this isn't a specifically Icelandic dish, but you can buy it in many diners and restaurants all over the country. Fried fish Orly with cocktail sauce and salad Orly batter: 300 ml (10 fl.oz.) light lager or water 2 tbs sugar 1 tsp salt (the original recipe says 1 tbs, but this must be an error) 1 tbs cooking oil (the original recipe says 1 tsp, but this must also be an error - there needs to be more than 1 teaspoon of oil in the batter) 1 egg yolk flour 1 egg white Mix together the lager or water, sugar, salt oil and egg yolk and thicken with flour until the batter is the thickness of pancake batter. Let stand for 1 hour at room temperature. Whip the egg white stiff and fold into the batter just before you use it. May be used t
5 comments
Read more