Showing posts from 2016
Show All

August 26, 2016
I was given this recipe by a friend, but haven't personally tested it, so I'm not making any guarantees as to originality or similarity to Gunnars remúlaði. 100 grams mayonnaise 50 grams sour cream 3-4 tbs. sweet relish (she uses the Heinz brand) dash of mustard dash of curry powder Stir together well and adjust spices. Serve with fried fish or hot dogs.
Post a Comment
Read more

January 29, 2016
I’ve just been reading an interesting report by Matís, an Icelandic biotech R&D institute, about skyr.  They make a distinction between modern skyr and traditional skyr and one of the conclusions they come to is that MS Skyr is not traditional because it deviates from the traditional methods of making skyr. (I have already posted a recipe for skyr , which may be referred to for one traditional method). If you want to try the real thing, the report mentions that KEA and Bíóbú both make skyr with (modernised) traditional methods. Their products are available from supermarkets.  In addition you can also buy traditional skyr from a couple of farms that participate in the Beint frá Býli movement (Farm Food Direct), and from specialised shops (I'm sure you can buy it from Frú Lauga , for example). I'm planning to read the report in more depth and may post a digest of the findings.
1 comment
Read more 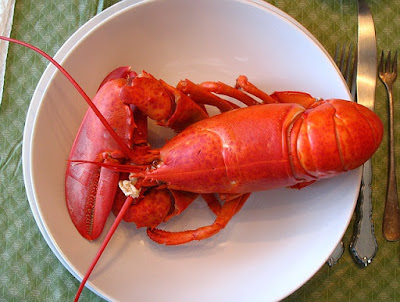 Mention lobster and the image conjured up in most people's minds tends to be of an American lobster. Looks yummy, doesn't it? Public domain image downloaded from Pixabay Public domain image downloaded from Wikimedia However, when Icelanders speak of lobster, they tend to mean leturhumar or langoustine ( Nephrops norvegicus ), a smaller cousin of the American lobster that is found in the north Atlantic ocean and parts of the Mediterranean. The westernmost part of its range is around Iceland and it is found as far north as northern Norway and as far south as Portugal. (Here is a distribution map ). Also known as Norway lobster, Dublin Bay prawn or scampi , it is a delicious crustacean that has many fans. It can be used in many different kinds of dishes, but the most popular uses in Iceland are in soup and roasted, grilled or fried. Often the same langoustines will provide material for two dishes, with most of the flesh being fried/grilled/roasted and the shells b
Post a Comment
Read more

News: Skyr in the UK

January 19, 2016
Skyr produced by Arla has been available in several flavour varieties (including natural) in the UK since the middle of last year. How I managed to miss this, I don't know, because this kind of news usually makes headlines in the Icelandic media (we are that proud of our skyr). It's possible the news has been ignored here because the skyr in question is not produced in Iceland.  Iceland failed to acquire a protected designation of origin for skyr and therefore anyone can use the term, even if the product doesn't really conform to the traditional definition of skyr. I am in no way implying that this is what Arla has done, but it has been implied that certain other producers are making yogurt, thickening it with rennet and calling it skyr. However, MS Iceland Dairies ( Mjólkursamsalan in Icelandic), has now started producing skyr for export to the UK. It will, to begin with, be available in Waitrose supermarkets in and around London as of February 8. I'd be
2 comments
Read more
More posts