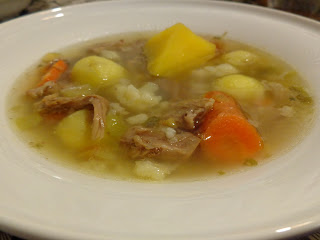 
Bring the water to the boil. Rinse the meat with cold water and drop in the boiling water. Lower temperature to medium. Allow meat to cook for about 2-3 minutes. Skim off the scum and add salt. Cook for about 30 minutes. Add rice/oats (if using). Lower temperature and cook on low for about 10 minutes. Add carrots, onion, cabbage, cauliflower, rutabaga, potatoes, kale and leeks (if using). Cook for 20 minutes. Season to taste with salt and pepper. Skim off fat before serving.

Serving options:
Save some soup for the next meal. Kjötsúpa tastes even better the next day.

Anonymous said…
I never cooked this. But I don't think I will like Lamb. But, I discovered this because I had to do a report on Iceland and I had to do a page on a recipe of Iceland and I found this one. Thank you so much for all the information. Don't worry, I did not plajarise, I cited the page, giving you ALL credit. :) Nicely written page.
March 14, 2009 9:01 pm

Bibliophile said…
Thank you, Anonymous. You could hardly have chosen a better recipe to show every day traditional Icelandic cooking at its best. As to not liking lamb - don't dismiss it until you have tried it. Kjötsúpa is perhaps not the best dish to introduce one to lamb - if you want to try it, start with a fillet, done medium rare, grilled cutlets, or melt-off-the-bone slow-cooked shanks.
March 15, 2009 12:02 am

Junior said…
Wonderful page and recipe! Thanks Jo. I have followed your page for quite some time a long time ago and recently went to Iceland and had a chance to try this at Gullfoss while I was there. By far the best soup I have ever had! Unfortunately lamb meat is quite a bit more expensive here in Canada. I will have to give this a try on a special occasion!
September 15, 2010 3:51 am

Chun said…
Hello There!
I'm a visitor from HK, once I come back form the Northern Island, I searched this reciept.

Anonymous said…
Rutabaga (a turnip or kohlrabi) - unfortunately none of these are available in the Czech Republic. I will do my best with ingredients that are available here. I am getting ready to make it an easter dish tomorrow.

travelstockblog said…
I had this at Gullfoss too and it was wonderful. Glad to have the recipe and all the information as well. It would be lovely at Easter time.
Thanks for sharing.
November 10, 2013 1:17 am

Anonymous said…
I just came back from Iceland and this soup was so good. I am going to make it this weekend!!!Thanks for the recipe.
December 18, 2013 8:46 pm

Holly said…
I found your recipe on Google, first one listed at the top when searching Icelandic stew. I used one pound of Icelandic lamb stew meat, and two small shanks with meat one them and made a vice quart pot using rutabaga, potatoes, onion, cabbage, celery, carrots, salt, and pepper. I added the celery and some fresh herbs- a bit of thyme and sage. I had some icelandic stew while visiting Iceland in 2010, and it was certainly a dish to remember! Serving this up to company along with some homemade honey, oat wheat bread. My only drawback from making it more often is the expense... A five quart pot of this stew including the lamb meat from Iceland adds to about $25-$28.
December 13, 2014 9:05 pm

Anonymous said…
This is another fine recipe I found here I absolutely needed to have. I was never able to get this on anywhere near right as Kjotsuppa in Iceland always seems to have a light and delicious flavor all its own. It appears simple, but its hard to get it right!

As a kid I traveled a few times back to Iceland on the freighters Langjokull and (the old) Hofsjokull and this soup was a staple aboard daily. Thanks for sharing this.
Olafur G

paul treble said…
I had this when i visited Iceland this spring and it was delightful and very moreish. I will cook this tonight to see if I can try and create that amazing soup. I think I had it at the cafe bar in Gullfoss too. Regards
June 01, 2016 10:28 am

August 05, 2006
I have received a request from someone who wants to know how to cook whale. The recipes are presented here for the curiosity value, as whale is only available in a few countries. I haven't tasted whale since I was in my teens, and I don't expect many of my readers will ever get the chance to try it. The recipes are therefore untested by me. Beef or a good, tender piece of horse-steak can be substituted for whale, in which case you can leave out the beating. Recipe nr 1: 3/4 to 1 kilo whale meat (or beef/horse) 50 g butter, tallow or lard 2-3 onions Salt and pepper Laurel leaf (optional) 600-700 ml water Sauce colouring (caramel) 50 g flour 200 ml milk Clean the meat: some say it's enough to slice off about a centimetre off each side of the piece, others recommend soaking in milk overnight. This is only to ensure there will be no oily taste to the meat, but if it has been properly handled in the first place, it will not taste oily. Cut into steaks and beat with a meat ma
Read more

Still in keeping with the Þorri theme, here is a popular food that is a favourite main dish for Christmas and Sundays, as well as being an essential part of the Þorri buffet and a popular cold cut to top bread and flatbread . Slices of hangikjöt Hangikjöt is an old favourite of the Icelanders. For centuries, we have smoked, pickled and dried food for preservation, and hangikjöt is one of the most delicious of the smoked products. Much like in olden times, hangikjöt is not an everyday food, except when used as a topping for bread, skonsur and flatbread . It may be eaten either hot or cold, and is traditionally served with cooked potatoes, white (béchamel) sauce, peas and pickled red cabbage. What follows is a description of the old method used for smoking lamb/mutton to make hangikjöt . Smoking food, general information: Smoking is an ancient food preservation method, which leaves the food tasting smoky-delicious. The smoke dries the food and contains preservatives which pr
Read more

Continuing with the Þorri theme, here is the single most popular food you will find on the Þorri buffet. It is a popular snack in Iceland, and many people take some with them when they go abroad on holiday. Harðfiskur, whole fillet Of the traditional Icelandic foods, harðfiskur and skyr are probably the two which most appeal to foreigners. I have received several e-mails from people asking how to make harðfiskur or where to buy it abroad, and so I decided it was time to give a description of how it's made. Many kinds of fish dry well, but traditionally it is mostly cod, haddock and ocean catfish (wolf-fish) that are dried. Flounder also makes excellent harðfiskur , and in some areas of Iceland people also dry arctic char.   Drying haddock, cod and flounder: Harðfiskur in ready-to-eat pieces Wash the fish and scrape off the slime. Gut the fish and remove the head. Haddock and cod can either be butterflied or filleted before drying. Flounder is filleted. If you but
Read more